Menu
Back to the blog

After a great deal of planning, organising, time, effort and determination by Anne Jenkins the Community Garden at Charleston in Dundee is really starting to take shape. The space that was identified for this was a large area in between houses with large bushes. The photographs show the space in its infancy with the fencing in place.

The idea of the garden came from a suggestion from the tenants group in Charleston who wanted to create a space for growing fruit and veg. This was back in August 2014 and so the first steps were taken by Anne into the planning of what this would look like, what the tenants wanted to see, accessibility for everyone, how would we fund this and who would do the work??

Anne completed an application for funding through Keep Scotland Beautiful and received a grant of £250 which although a good outcome this was not going to achieve the vision that Anne had for the garden.

Anne carried on unperturbed which for any of you that know Anne will realise that this was not easy for her and so she took the first steps towards getting the existing bushes cleared from the area, had some fencing put up which established the area initially which really set the marker that the Blackwood Community Garden was going to be accomplished.

The tenants were really pleased to see that their idea looked like it was starting to happen and so Anne sought out other sources of funding and applied to the Dundee Partnership Fund and this time was successful in being given a grant of £5000. This was going to make a huge difference to how the garden was going to look.

Anne sought out a garden designer to help with planning and also had input from a local OT to make sure that the garden was going to be accessible for all. Specialist flooring was laid to ensure that it is suitable for wheelchair users, raised beds ordered and put in place and a bench of course for the tenants to be able to sit and enjoy the space. What’s been planted in the bedding areas is  fairly low maintenance but there’s also a sensory aspect to it so there lots of lavender and other fragrant scents for everyone to enjoy.

So what next? We have our very own master fruit and veg grower in Chick Tippet one of our long serving support assistants in Tayside Services.  Over the years staff and tenants have sampled his produce and everyone always in awe of how good the fruit and veg looks and tastes. Chick was the obvious choice to help out with this project and for him to share his skills and knowledge for others to benefit from his green fingers. Chick was happy to give up his time to assist with this project and Anne and him have looked at regular dates for Chick to be at the garden to support the tenants with the first ‘Dig It’ with Chick taking place last week.

The tenants decided that they would like a greenhouse to help with growing of their fruit and veg so we will be able to purchase this along with the first seeds over the next few weeks.  Staff have also been encouraged to go along and lend a hand and where possible support some of the tenants to visit the garden and to see if they want to take part. Ian Ross Support Assistant and Andrew Whelan Housing Officer and of course Anne Jenkins were also on hand last week and Ian Gerono will also be popping over to lend his support and assist the tenants with planting over the coming weeks.

I am sure you will agree that the Blackwood Community Garden is looking great and as this continues to establish it will not only be a great space for tenants to sit, relax and enjoy but also gives a social aspect to the tenants with them being fully involved in creating and developing their own Community Space something that they are really very proud of. Some of the tenants have suggested selling the fruit and veg so that they can purchase more plants and seeds and I am sure there will be a long queue forming from the staff alone.

Thanks to Anne for turning the vision into a reality! 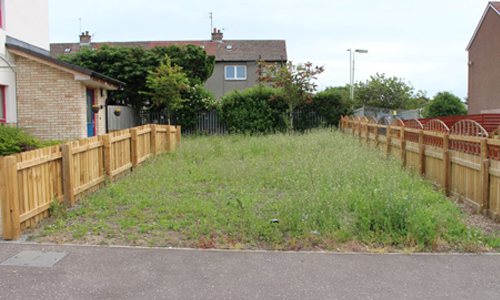 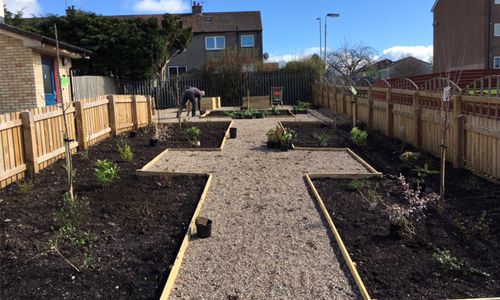